Skip to content
It’s a late Sunday post for me but I’ve been a little under the weather over the last few days and just now starting to feel better.  I just haven’t had the energy to do anything but today I am starting to feel much better.  Cody has made sure his mama is looked after too and has been quite attentive, giving me snuggles and love.  He’s such a sweet boy. 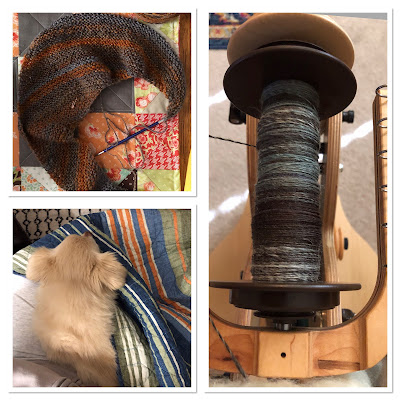 I did manage to work a bit on my Nurmilintu shawl and really do love how it is knitting up in my handspun. I have to say that knitting  seems be make everything better and today I plan just to knit.   I did spin a little on Thursday and really do love how my hand blended rolags are spinning up.  I blended this yummy fiber up last spring with hopes of using it for a pair of hand knit socks.
As far as reading, I’m almost finished reading Jane Seymour: The Haunted Queen by Alison Weir and I am really enjoying this book. 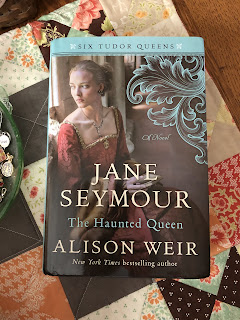 From Goodreads:A novel of the devout young woman who became the unwilling object of King Henry VIII’s ardor – and the mother of his only son. In this third book in the epic Six Tudor Queens series, the acclaimed historian and best-selling author brings new insight to this dramatic story, showing how pure fear for her life determined Jane Seymour’s actions. Twenty-five-year-old Jane Seymour wants nothing more than to become a nun. But her ambitious father has forced her to live at court as lady-in-waiting to Queen Katherine of Aragon, a fellow Catholic whom she soon comes to love and admire. So Jane is appalled when King Henry shunts Katherine aside in his lustful pursuit of Anne Boleyn, but even more so when he takes Anne’s life in his rush to wed – Jane herself! Unwilling to marry but terrified to resist Henry’s advances for fear she might share Anne’s fate, and propelled by her family, Jane becomes queen of England a mere 10 days after Anne’s execution. She knows she must produce a male heir without fail. Her very life depends on it.

That’s about it for me today and I wish you a happy Sunday afternoon!

6 thoughts on “Sunday Musings: A Little Bit Of Everything”