The Mystery of Mrs. Christie by Marie Benedict
My rating: 5 of 5 stars

At first I wasn’t sure I was going to like this book but as I progressed I really found I was enjoying it. What an interesting thought the author had as to the known disappearance of Agatha Christie, one that is a viable possibility based on many writings of others who thought the same thing.

Saturday night I finished The Mystery of Mrs. Christie by Marie Benedict. When I started this book I wasn’t sure I would like it simply because of how it was written with chapters alternating between the past and the present but as I progressed it made sense as to why the author did this.  In order to understand the the present you had to understand the past, and alternating between both turned out to be a good thing.  There are many thoughts about the disappearance of Agatha Christie in 1926, in including the thought portrayed at the end of the book. Was it amnesia or was it revenge? I think the author truly portrayed the most logical possibility, after all Agatha Christie was the queen of murder mystery novels. 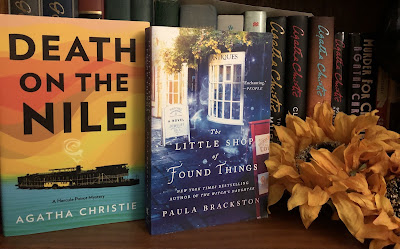 I haven’t quite decided what I want to read next but it either will be Death On The Nile by Agatha Christie, which I am looking forward to seeing the movie that is coming out next year staring Kenneth Branagh as Hercule Poirot, or The Little Shop of Found Things by Paula Brackston, which is appealing to me right now simply because I love books that include time traveling.
What have you been reading?

2 thoughts on “On My Bookshelf: A Finished Book and What’s Next”