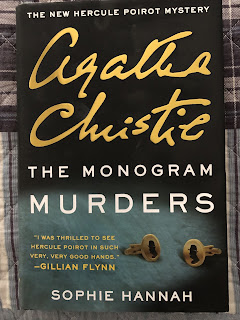 I finished “The Monogram Murders by Sophie Hannah” yesterday afternoon and have to say that I personally loved it.

I am puzzled by the bad reviews on Goodreads but feel that it’s just diehard fans of Christie that cannot see past their love of the author and her betrayal of Hercule Poirot.  For me it was written quite well and I felt that the author portrayed Hercule Poirot as Christie would have.

There were just enough twists and turns in this book to keep me in suspense and the plot definitely kept me going. I was totally surprised at the end to find out who did it, which is not often the case in mystery books I’ve read in the past.  So I must rate this book with ⭐️⭐️⭐️⭐️. 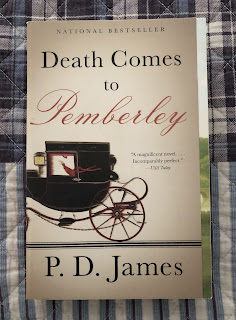 I have now started Death Comes to Pemberley by P.D. James.  I’ve owned this book for quite some time but never have read it and thought it would be perfect to start the month of October with. This is another book with very mixed reviews so it will be interesting to see what I think about it after I’ve finished reading it.

A Synopsis from Goodreads:

It is 1803, six years since Elizabeth and Darcy embarked on their life together at Pemberley, Darcy’s magnificent estate. Their peaceful, orderly world seems almost unassailable. Elizabeth has found her footing as the chatelaine of the great house. They have two fine sons, Fitzwilliam and Charles. Elizabeth’s sister Jane and her husband, Bingley, live nearby; her father visits often; there is optimistic talk about the prospects of marriage for Darcy’s sister Georgiana. And preparations are under way for their much-anticipated annual autumn ball.    Then, on the eve of the ball, the patrician idyll is shattered. A coach careens up the drive carrying Lydia, Elizabeth’s disgraced sister, who with her husband, the very dubious Wickham, has been banned from Pemberley. She stumbles out of the carriage, hysterical, shrieking that Wickham has been murdered. With shocking suddenness, Pemberley is plunged into a frightening mystery.”

I will share that I watched the PBS Masterpiece mini-series, Death Comes to Pemberly, several times and absolutely love it.  I often wished there had been another season, only because it kind of left it open for that.  If you enjoy period mystery pieces, I highly recommend it!
Have a wonderful day!
Tina

2 thoughts on “On The Bookshelf: A Finished Book and Starting A New Book”