TBR is an acronym that stands for to be read. – Dictionary.com

Last Thursday I finished A Distant View, which is the 11th book in the Sunday Philosophy series by Alexander McCall Smith.  I have decided this will be the last book of the series I will read as I’m simply board with the predictable plot. I may eventually finish the series, but not any time soon. 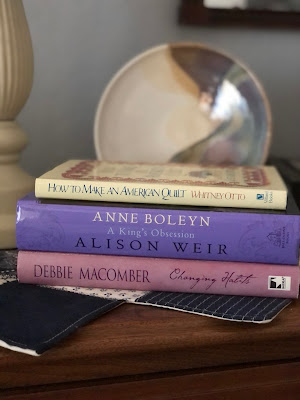 “Once you love, you cannot take it back, cannot undo it; what you felt may have changed, shifted slightly, yet still remains love. You still feel-though very small-the not-altogether unpleasant shock of soul recognition for that person.”  ― Whitney Otto, How to Make an American Quilt (Goodreads)

I have started How To Make An American Quilt by Whitney Otto, which was made into a movie staring Winona Rider, Ellen Burstyn, Anne Bancroft, Maya Angelou and Kate Capshaw. I’ve had this book for a very long time and really don’t know why I haven’t read it before.  This is a very short book, but one that I am actually enjoying and will be finished with today. There are mixed reviews about this book, which I can understand as it is written in such a way that can make some readers not like it.  For me, it’s about life and how different people react to life.

I have decided to start Anne Boleyn by Alison Weir (one of my all time favorite historical fiction/non-fiction writers) next. I finished Katherine of Aragon end of last year and absolutely loved it and look forward to reading this one, which is the second novel in the Tudor series.

‘Born into a noble English family, Anne is barely a teenager when she is sent from her family’s Hever Castle to serve at the royal court of the Netherlands. This strategic move on the part of her opportunistic father also becomes a chance for the girl to grow and discover herself. There, and later in France, Anne thrives, preferring to absorb the works of progressive writers rather than participate in courtly flirtations. She also begins to understand the inequalities and indignities suffered by her gender.Anne isn’t completely inured to the longings of the heart, but her powerful family has ambitious plans for her future that override any wishes of her own. When the King of England himself, Henry VIII, asks Anne to be his mistress, she spurns his advances—reminding him that he is a married man who has already conducted an affair with her sister, Mary. Anne’s rejection only intensifies Henry’s pursuit, but in the absence of a male heir—and given an aging Queen Katherine—the opportunity to elevate and protect the Boleyn family, and to exact vengeance on her envious detractors, is too tempting for Anne to resist, even as it proves to be her undoing. While history tells of how Anne Boleyn died, this compelling new novel reveals how fully she lived.’ – From Amazon

My goal is to finish the remaining four novels in this series by the end of the year.  Due to the size of the books and the detail, that may not happen but it’s a great goal to have.

It has been a lovely morning enjoyed with my cup of coffee and my knitting.  I am truly loving how my Boxy Sweater in knitting up and the color is just the perfect shade of gray.  This definitely will be a great sweater for this late fall and I’m looking forward to wearing it !

I hope you all are having a wonderful relaxing day today, and are able to enjoy all the things you love to do on a Sunday.

2 thoughts on “Sunday Musings: Reading and A Little Knitting”