I started my spinning adventures in 2010 (wow, 10 years have already passed !!) with my very first wheel, a vintage single treadle Ashford Traditional.  I learned a lot about spinning that year and decided to purchase an Ashford Kiwi (back when Ashford still out the Kiwi on the treadle) double treadle to allow me to continue my spinning adventures.  This wheel got a lot of use, as well as her sister the Kiwi 2 that a purchased a year later.

During this time I belonged to quite a few Ravelry Groups that were focused on spinning or wool.  One such group was Tour De Fleece.  This was a very fun group, filled will competitive spinning, as well as relaxed spinning, comoradery and just plain fun.  The goal was to spin as much as you could during Tour De France.  I spun a lot during this time and still have handspun from these yearly events I haven’t used.

During this time I discovered an Indy Dyer that I fell in love with, Funky Carolina. During one Tour De Fleece, I purchased three braids of Funky Carolina in the color S’mores.  I finished one braid but the other two were packed away and kind of forgotten until recently. 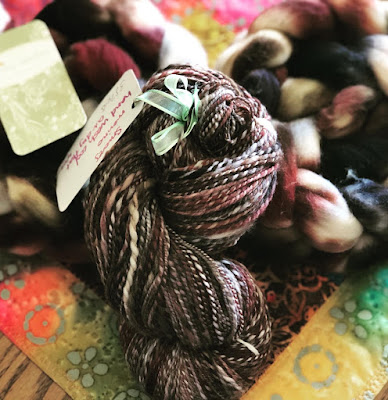 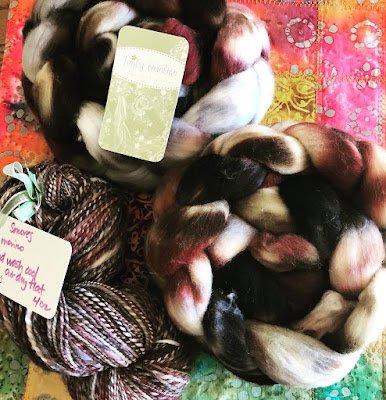 I want to be able to use my handspun for a short cardigan and found what I think will be the perfect design to show off my handspun and I plan to knit it up  in different colors that I have had in my basket for too long.  If I can achieve roughly the same yardage as I did a few years ago for the above finished handspun, it will give me the additional yardage I need for the design I want to knit (shown below).

The Funky Carolina braids are very compact so I will start pre-drafting them to get them ready for spinning.  I am hoping to to start spinning up this fiber in a course of a week or so, but due to other spinning projects n line, it might get delayed a bit.

while I wait to start spinning my Shetland wool for my Sheep Heid hat, I decided to cast on the Rollin Beret , design by Woolly Wormhead, using my handspun I finished December of 2018, October House in the color Apres.  I originally thought that  Molly by Erin Ruth would be a great pattern for this yarn but after looking around for something more simple, I decided on the Rollin Beret. 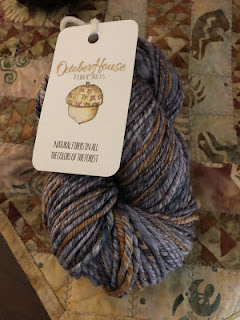 Today I am looking forward to casting on this project today and relax with something simple to knit (rather mindless knitting in a way).  I also plan to prepare my Shetland wool for spinning and hope to start this intentional spinning project later this week.