At the end of November I mentioned the kit I purchased from the 1764 Shepherdess for the December Humbug Spin Along.  This kit featured 3.5 oz of Jacob Humbug, which I’ve never spun, and a few fun goodies.

This past Sunday afternoon I decided that it was time to start spinning this fiber and chose my Ashford Kiwi with it’s bulky flyer.    For this spin I’ve decided to go bulky.  I took the 3.5 oz braid of roving and split it evenly into two 1.7 oz strips.  I then split the first strip into 8 equal parts, gently drafted it to open up the fiber and started spinning.

I am spinning worsted and with a low twist.  My original plans was to spin the first 1.7oz on one bobbin and the second on another bobbin, then ply together.  After much thought I’ve decided to spin all the Humbug together and play with a solid Jacob I have in my stash.  I am aiming for bulky weight with this spin and I really love the marled look I’m achieving.

The Jacob is a British breed of domestic sheep. It combines two characteristics unusual in sheep: it is piebald—dark-coloured with areas of white wool—and it is often polycerate or multi-horned. It most commonly has four horns. The origin of the breed is not known; broken-coloured polycerate sheep were present in England by the middle of the seventeenth century, and were widespread a century later. 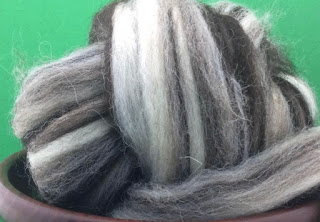 I just love the marled look !
I’m very excited about this spin and can’t wait to see how it turns out.  I think it will be perfect for a bulky weight hat!
Until next time ~ be creative!
Tina