It’s time to get back to spinning for my breed study and this month’s fiber from The 1764 Shepherdess is Bluefaced Leicester, commonly known among spinners as BFL. 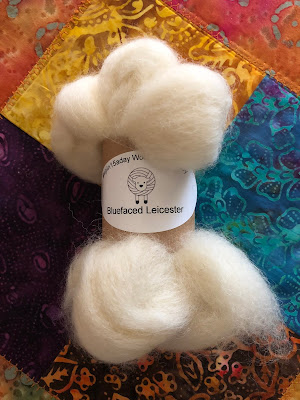 I have prepped this squishy soft 1 oz of roving and have started to spin it up.  I am spinning only 15 minutes a day ( Instagram #spin15aday and #spin15aday2018challenge) and will have this finished and chained plied over the weekend.

Bluefaced Leicester (BFL) is buttery soft and perfect for new spinners as it drafts beautifully and spins up like a dream.  It is perfect for next to the skin garments, such as socks, scarves, mitts, hats and sweaters.  My fiber stash contains quite a bit of BFL and BFL silk blends.  I personally love spinning this fiber and have also achieved exactly the weight I want when spinning.

Here’s a little info on the Bluefaced Leicester sheep …

The Bluefaced Leicester (BFL) is a longwool breed of sheep which evolved from a breeding scheme of Robert Bakewell, in Dishley, Leicestershire in the eighteenth century. First known as the Dishley Leicester, and then the Hexham Leicester, because of the prevalence of the breed in Northumberland, the name Bluefaced Leicester became known at the beginning of the 20th century.  In the 1970s, the Bluefaced Leicester was exported to Canada. Exported frozen semen from the United Kingdom is now used to expand the genetic diversity in Canada and the United States. This breed is raised primarily for meat, but their fleece is becoming increasingly popular for handspinning. Bluefaced Leicester sheep may also have brown on their face.

Once this breed study is spun up, I’m thinking it might be time to get back to spinning my Abundant Earth Fiber ( post intentional spinning ).  I really want to get this done so I can cast on my hap cowl.

Until next time ~ stay creative!
Tina